The Hecla-Kilmer project is located in northern Ontario, and is a direct extension of the Company’s ongoing exploration strategy at its nearby Ranoke property towards a blue-sky discovery of a large footprint iron oxide - copper-gold hydrothermal breccia system using new exploration technologies and modern mineral deposit models on previously untested targets. The Company has been working on Ranoke for the past three years, and the reader is referred to the Ranoke project page on this Website for a detailed description of its mineral exploration potential, and work completed by VR to date.

The Ranoke and Hecla-Kilmer properties are remote and the targets are covered and previously untested, yet they are proximal to regional infrastructure including rail, power and highway which enable cost-effective exploration and would facilitate efficient development should a discovery be made.

Both Ranoke and Hecla-Kilmer (H-K) are large magnetic anomalies associated with regional gravity features along the western margin of the Kapuskasing Structural Zone (KSZ), a crustal-scale shear zone hundreds of kilometres long which bisects the Archean Superior province between James Bay and Lake Superior. The KSZ has a long-lived history of repeated ultrabasic and alkaline intrusions spanning 1.6 billion years, and it is a prospective setting for a large IOCG or carbonatite-hosted hydrothermal copper-gold breccia system.

Hecla-Kilmer is a polyphase alkaline intrusive complex with carbonatite approximately 4 – 6 km’s across. A cursory historic drill program in 1970 for base metals in the Paleozoic cover rocks over Hecla-Kilmer identified gold-bearing magnetite-chalcopyrite-fluorite veins and hydrothermal vein breccia within carbonatite rocks in the basement, prior to the discovery of Olympic Dam and the development of the IOCG mineral deposit model, and prior to a high resolution airborne magnetic survey flown in the region in 1993. There has been no modern exploration or drill-testing of the core of the H-K complex for a large-scale magnetite-copper-gold-fluorite hydrothermal breccia system.

VR completed a high resolution and sophisticated airborne EM survey over H-K in June, 2020, in order to identify low resistivity bodies and/or finite conductors associated with major magnetic gradients within the untested core of the complex. A first pass drill program is planned for this fall, 2020, before winter conditions set in, to test the highest priority targets for discrete, sulfide-bearing magnetite-copper-gold-fluorite hydrothermal breccia bodies that are both magnetic and conductive.

The Hecla-Kilmer property is located in the Moose River basin in northern Ontario, Canada. It is approximately 35 kilometres southwest of the Company’s Ranoke property, and only 23 km’s to northwest of the Ontario hydro-electric facility at Otter Rapids at the northern terminus of Highway 634 which links the region to the towns of Cochrane and Kapuskasing situated on the northern Trans-Canada Highway located some 100 km’s to the south.

The town of Moosonee located on tide water at James Bay is located about 125 km’s to the northeast of the property. The Ontario Northern railway connects Moosonee with the mainline at Cochrane along the Trans Canada Highway, and is only 23 km’s west of the property.

Hecla-Kilmer is a large property. It comprises 224 mineral claims in one contiguous block covering 4,618 hectares in an area approximately 6 x 7 km’s in size.

The property is located on provincial crown land, with mineral rights administered by the provincial Ontario Ministry of Energy, Northern Development and Mines (MENDM). There are no annual lease payments, but the MENDM requires certain annual exploration expenditures and reporting (ie. mineral assessment reports) in order to maintain a mineral claim in good standing. The property falls within the Moose Cree and Taykwa Tagamou First Nations traditional territories.

The property is owned 100% by VR. There are no underlying annual lease payments to previous owners, nor are there any joint venture or back-in interests. There is an industry-standard royalty attached to the property, including a buy-back provision to VR.

VR has completed the compilation, synthesis and interpretation of all available federal and provincial government regional data, and archived provincial mineral exploration assessment data in the Hecla-Kilmer area, and integrated it with the Ranoke project data base.

Ranoke and H-K are amenable for the effective use of modern exploration technologies for base and precious metal deposits. Near-by towns with road access facilitate cost-effective exploration. Subdued topography will allow for optimal airborne geophysical surveys such as EM and magnetics. Historic drilling demonstrates that overburden thickness is in the range of 40 – 70 m, average for the region and easily penetrated by modern drilling technology. Historic drilling also demonstrates that copper-gold-fluorite hydrothermal breccia comes to surface, that is, to the base of overburden and till, making the use of geophysics effective for basement targets.

The Company completed the first-ever airborne EM survey ever over the H-K complex in June, 2020, using the sophisticated VTEM+ system of Geotech Ltd. Flown at 100 m line spacing over a 6 x 7 km survey block for a total of 450 line-km’s, the data provide a high resolution of detail. The Company also had an independent, 3-D inversion of both magnetic and EM data completed for improved modeling for a potential magnetite-copper hydrothermal breccia body within the polyphase carbonatite complex. There are two prominent, high contrast and deeply rooted MVI anomalies (magnetic vectorization peaks) in the central part of the complex. The northern MVI anomaly is the highest priority because it correlates with the largest and strongest basement conductor identified in the VTEM+ survey.

The Company is planning for a first-pass drill program at Hecla-Kilmer in the fall of 2020, before winter conditions set in, in order to test the highest priority targets for magnetite-copper-gold-fluorite breccia bodies on magnetic gradients in the core of the complex.

Any potential drilling at Hecla-Kilmer or Ranoke in 2020 will be facilitated by the road-accessible camp used early this year for the Ranoke drilling and located nearby at Otter Rapids, at the northern terminus of Highway 634. The Company has worked extensively with both the drill company and the helicopter company to ensure for the safety of all workers on any drill program undertaken during the current COVID-19 pandemic.

Both the Ranoke and Hecla-Kilmer properties are centered on large magnetic anomalies associated with regional gravity features which occur along the western margin of the Kapuskasing Structural Zone, a long-lived, crustal-scale fault zone with bisects the Archean Superior craton between James Bay and Lake Superior, and hosts numerous alkaline, ultrabasic and carbonatite intrusions and kimberlites which span more than 1.6 billion years of activity. This tectonic setting is prospective for the development of large IOCG or carbonatite-hosted copper-gold hydrothermal breccia systems.

Hecla-Kilmer is a large, roughly circular and concentrically zoned polyphase alkaline intrusive complex with carbonatite approximately 4 – 6 km’s across. The complex was emplaced along the regional-scale tectonic suture between two sub-provinces of the Archean Superior Craton; the volcanic-dominated Wabigoon province to the north, and the sediment-dominated Quetico province to the south. Research published by the Ontario Geological Survey in 1988 and based on the petrography and geochemistry of pieces of core obtained from the historic drilling in 1970 described below described the core of the H-K complex as mostly nepheline syenite and phonolite, surrounded by a myriad of ultra-basic and carbonatite intrusive phases including olivine essexite, ijolite, pyroxenite and sovite.

Six diamond drill holes were completed at H-K by Ashland Oil and Elgin Petroleum in 1970 as part of a regional base metal exploration program of the Paleozoic shelf carbonate succession which covers Archean basement rocks in the region. One hole was abandoned, and only 854 m were completed in total in 5 holes, all on magnetic highs in the outer zones of the H-K complex. Importantly, the historic drilling for base metals in 1970 proved that the H-K carbonatite complex comes to surface, to the base of glacial till and overburden.

A high-resolution airborne magnetic survey was flown in the region in 1993 for diamond exploration. The survey shows clearly that Hecla-Kilmer is a concentrically zoned, high contrast magnetic anomaly 4 – 6 km’s across. Magnetic boundaries within the complex are sharply defined on RTP, 1VD and 2VD magnetic products. The historic drilling at H-K was done before this high-resolution survey, and before the discovery of the Olympic Dam copper-gold deposit in Australia and the development of the IOCG mineral deposit model, which helps explain why all five holes in 1970 were located in the outer concentric zones of the complex, and why copper-gold-fluorite hydrothermal breccia intersected in drill core in at least one of the holes was not sampled or followed up.

There has been no modern, systematic exploration or drilling of the core of the Hecla-Kilmer intrusive complex for copper and gold in the basement. The opportunity for VR is to be the first to apply modern IOCG and carbonatite mineral deposit models and the first to use modern exploration technologies to explore the core of the H-K complex for a magnetite-copper-gold-fluorite hydrothermal breccia system. 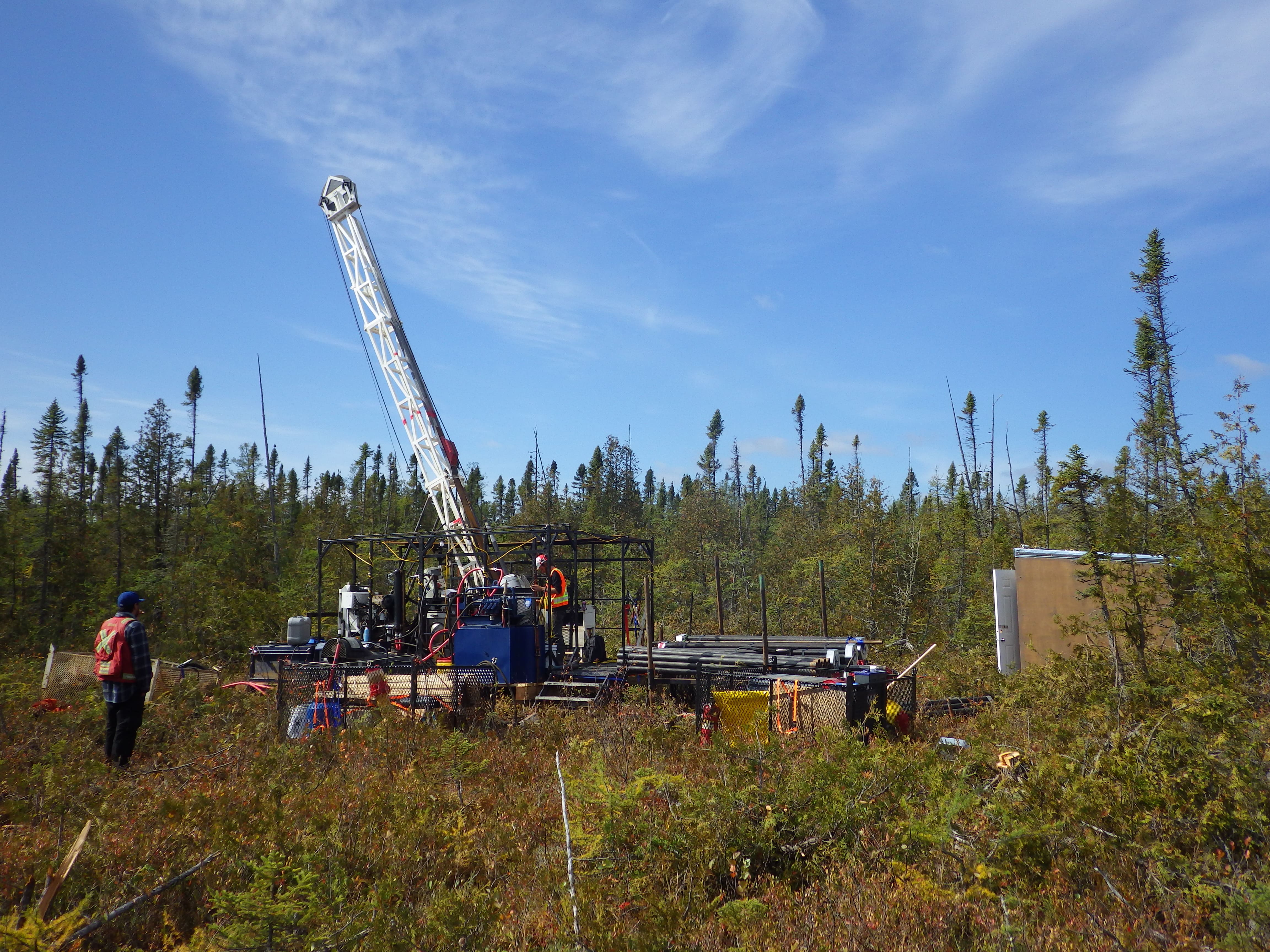 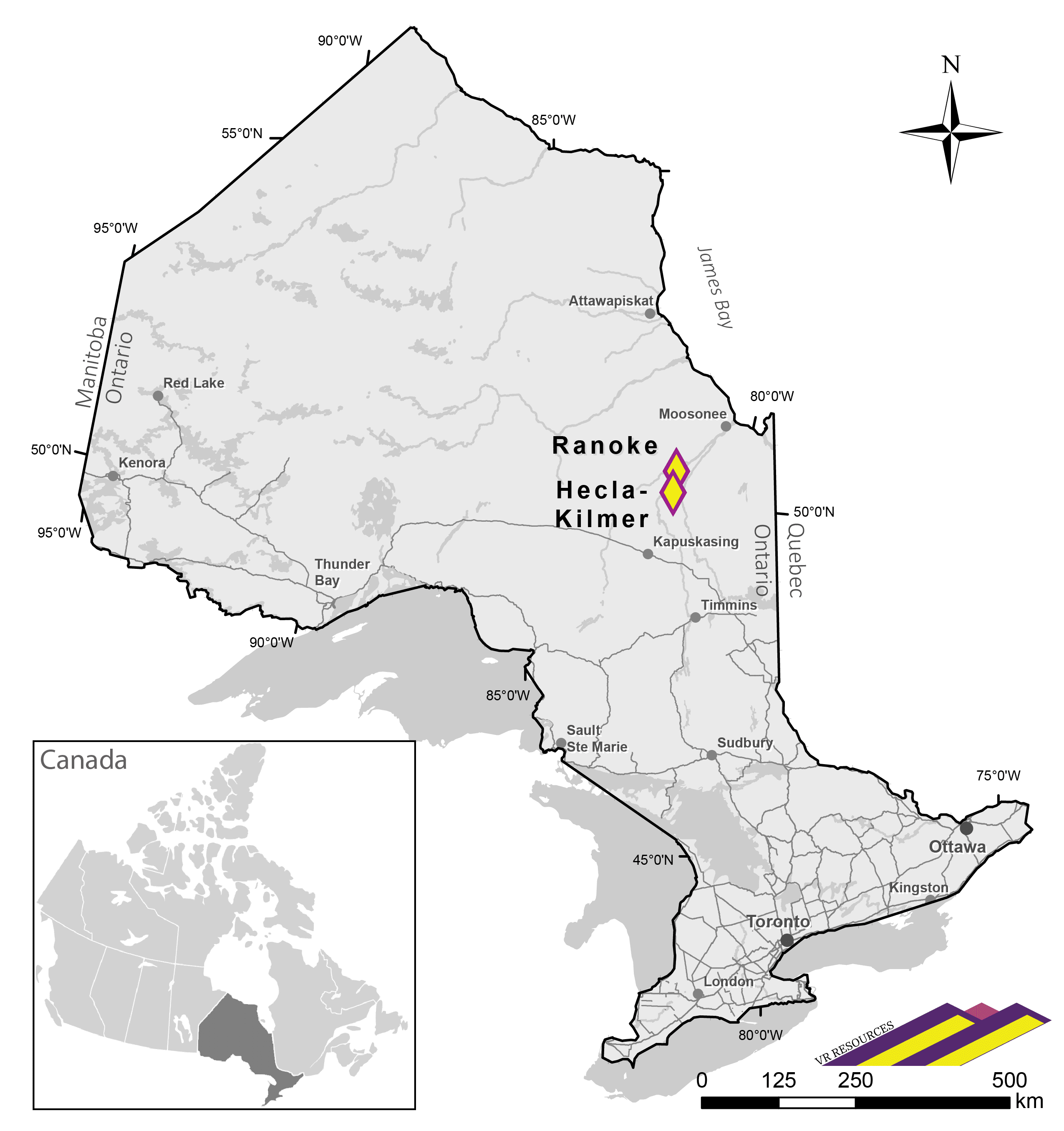 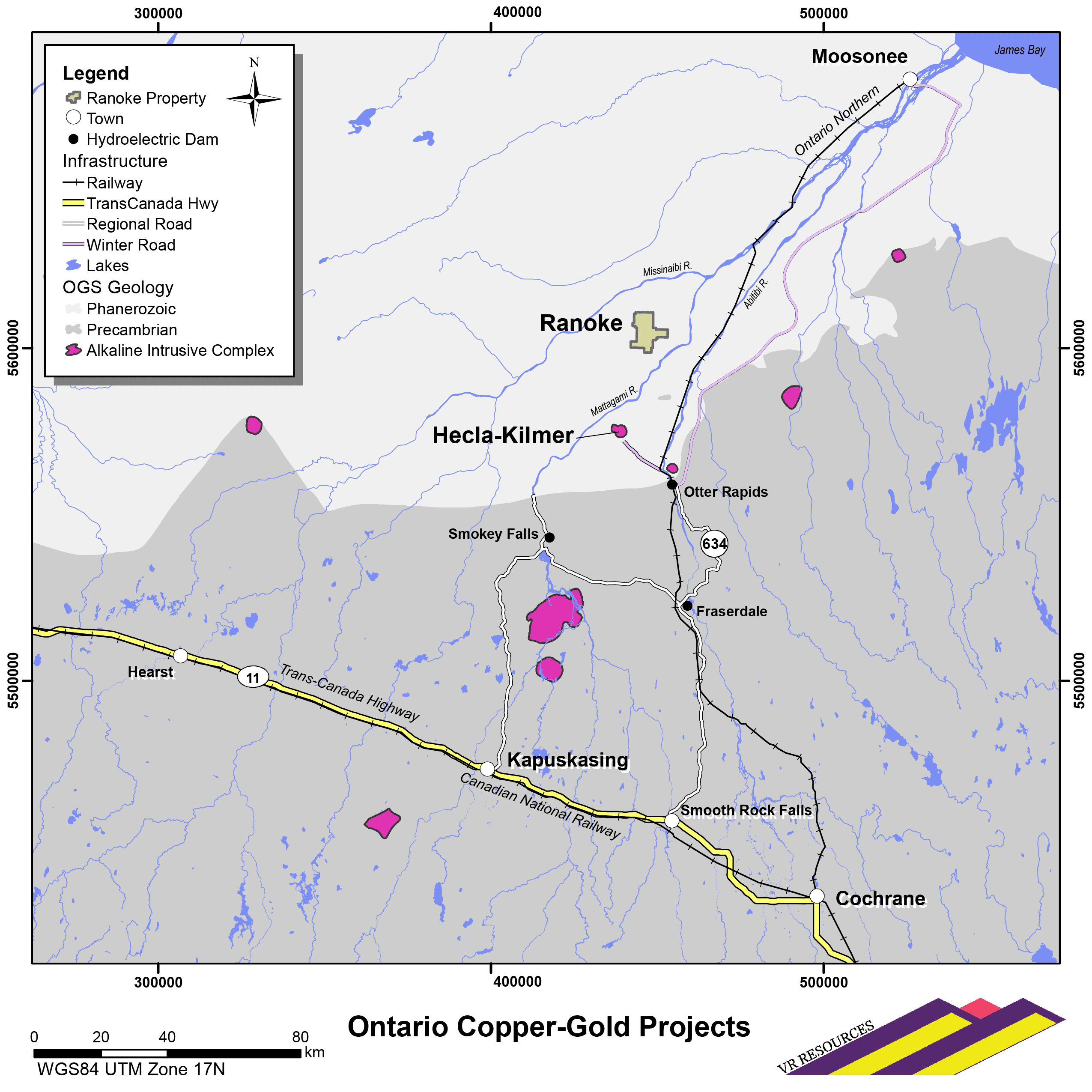 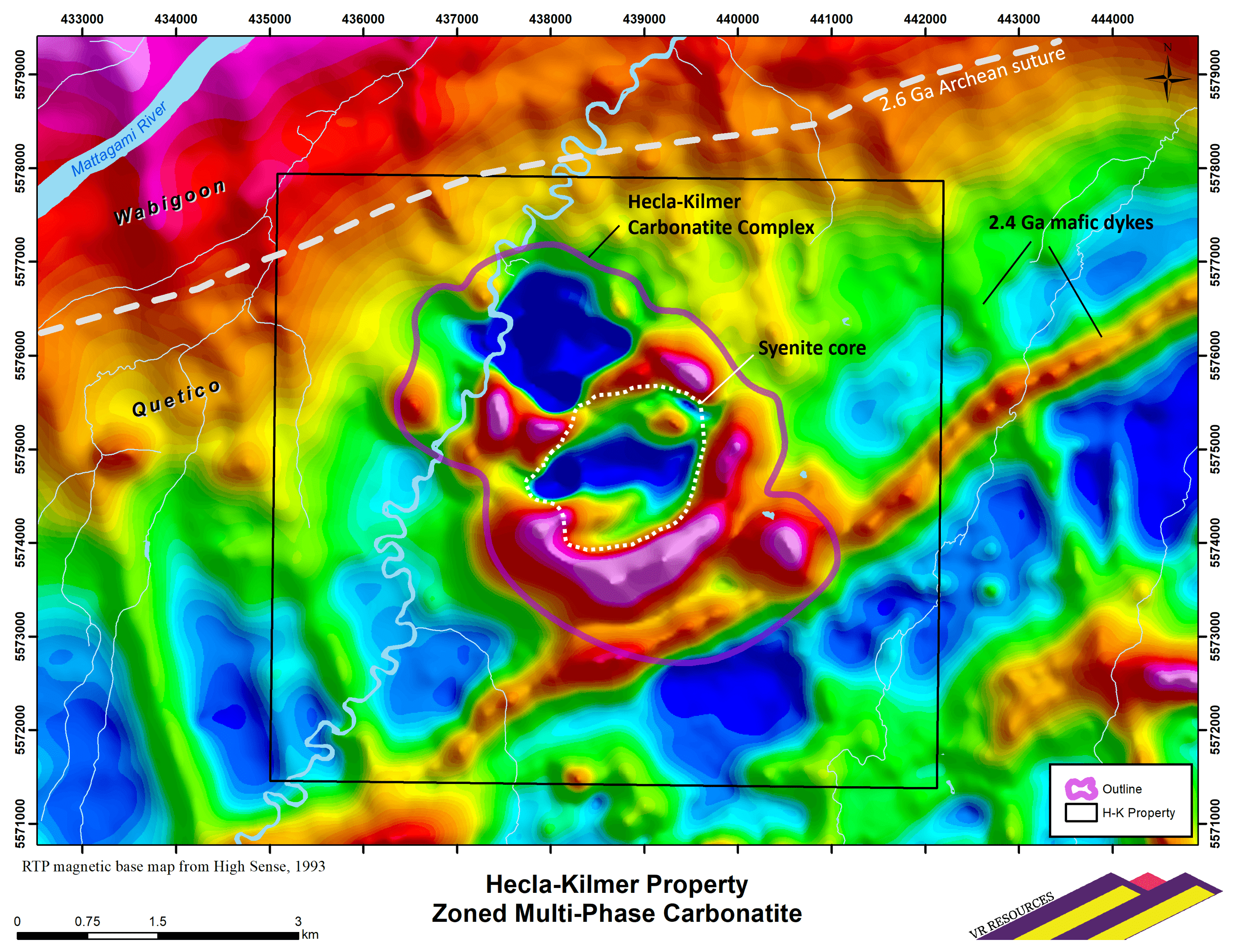 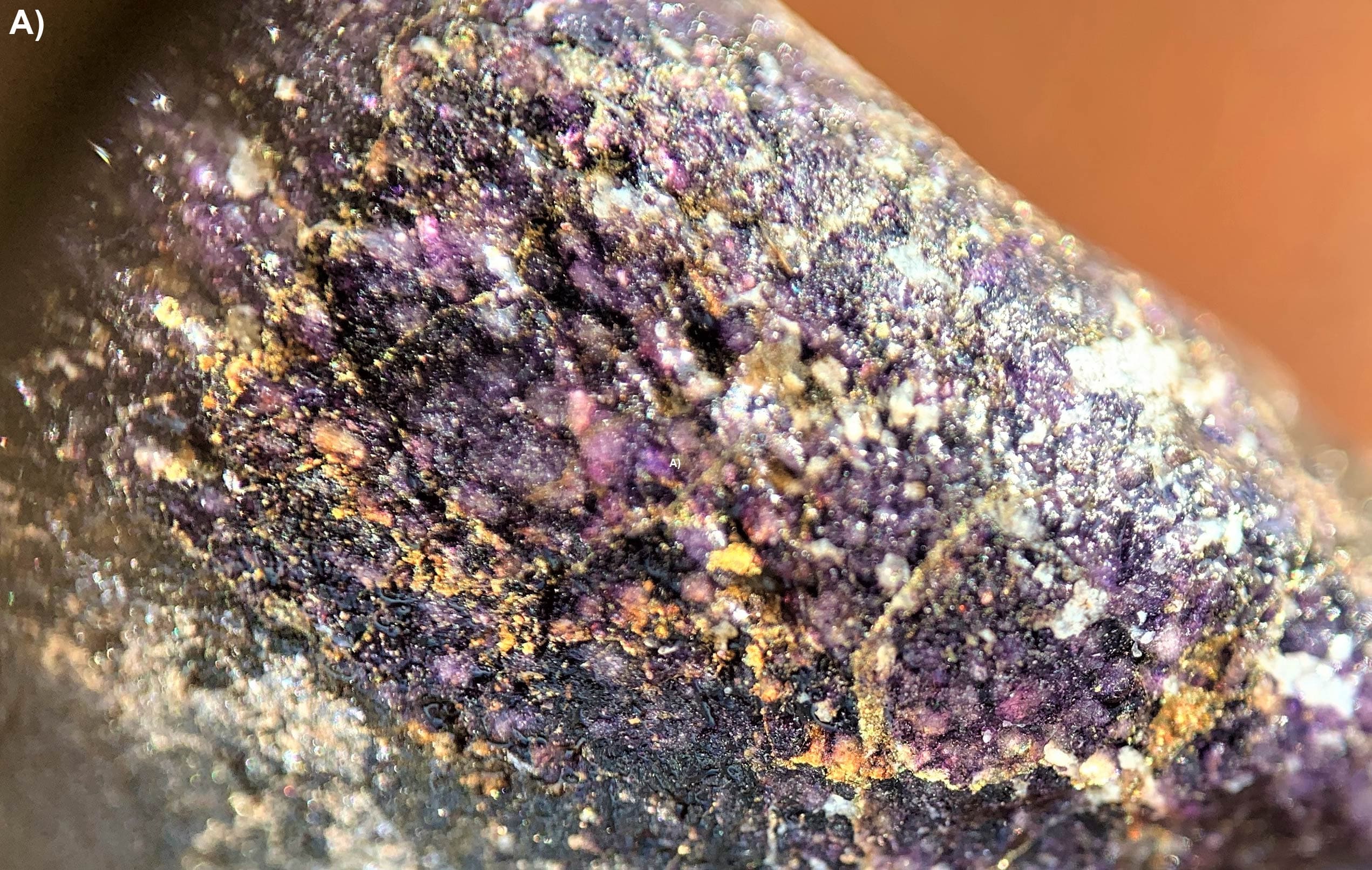 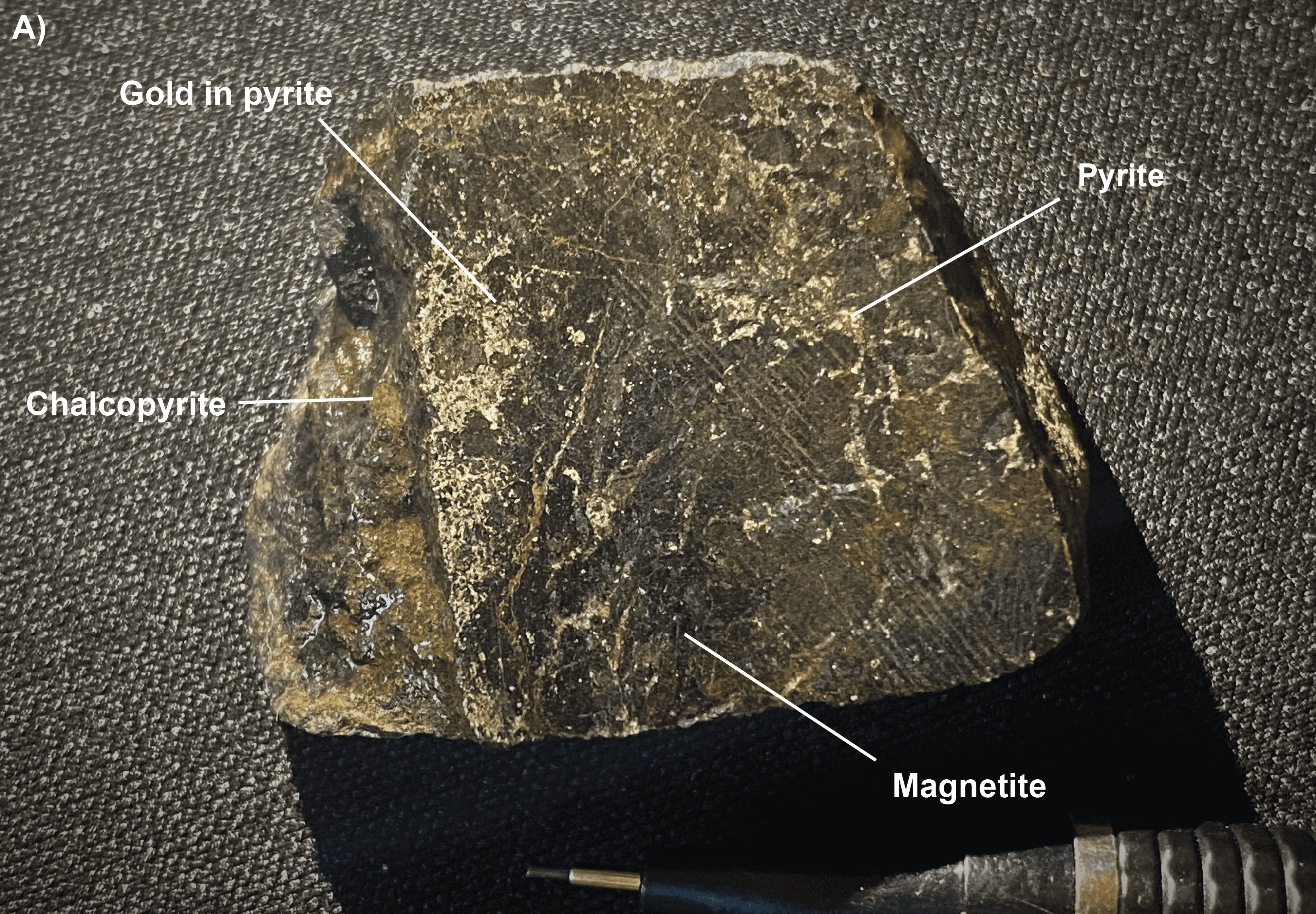 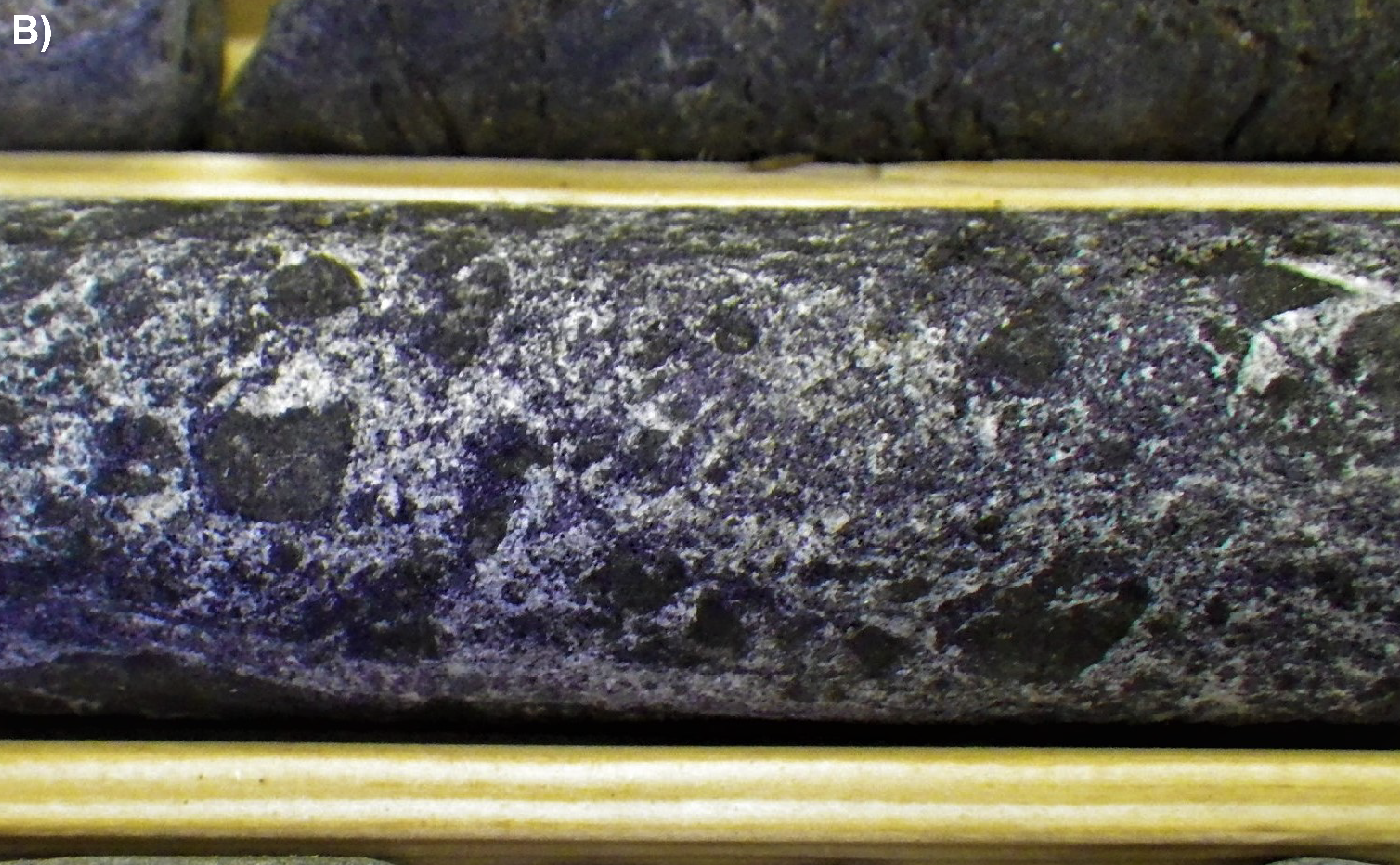