The Reveille project is located along the northern margin of the of the Walker Lane belt in west-central Nevada. It occurs in an extensional, Tertiary-aged rhyolite volcanic centre named the Goblin Knobbs caldera, and analogous in age and setting to that of the Big Ten caldera located some 75 km’s to the northwest, along trend, where the Company has been exploring epithermal gold veins and alteration systems for the past 5 years.

The Reveille property was reviewed for more than a year, including two site visits. Experience gained by exploration in the nearby Big Ten caldera and epithermal system is leveraged for Reveille. While the Company continues to work towards a full Plan of Operations permit for a drill program on the nearby Amsel epithermal gold target planned for the fall season, 2020, the Company will use the summer months to explore Reveille on the ground.

The opportunity at Reveille is twofold for VR. First, the consolidation of the various showings on the current property by the vendor allows VR to be the first in more than 150 years of history at Reveille to explore the entire property systematically, to apply the CRD model (carbonate mineral deposit) and modern exploration technologies across the entire mineral system in order to evaluate, prioritize and drill test any number of vein, manto and breccia-pipe silver occurrences at surface, and potentially a larger-scale root, or driver of the system at depth. Second, there is no previous diamond drilling of any of the showings; there are historic workings including local underground drifts and larger surface pits on the north and easts side of the property which date as far back as the 1870s.

Despite the lack of exploration at Reveille during modern times, there is excellent road access that will provide VR with cost-effective exploration. Further, the nearby airport at Tonopah will also make for efficient airborne geophysical surveys.

The Reveille property is located in Nye County in west-central Nevada. It is approximately 90 km’s east of Tonopah, Nevada, with access via Highway 6 to Warm Springs, Nevada. Local roads and trails provide excellent access both around and within the property itself.

The property itself is located within the southern part of the Reveille range. Topographic relief on the property is just over 1,000 feet, with the central, ridgeline axis reaching 7,900 feet in elevation.

Outcrop is extensive, and the predominance of limestone limits vegetation to grasses and sage, with sparse and stunted juniper. Where there is cover, colluvium is interpreted to be thin and local in nature. Soil profiles are poorly developed; fine, light brown colluvium normally gives way to more rubbly-weathered outcrop material within a half metre of depth, or less.

The Reveille property consists of 57 mineral claims in one contiguous block covering 1,157 acres (468 hectares) over an area of approximately 2 x 3 km’s.

The property is on federal land administered by the BLM, and is outside of the BLM’s broadly defined area of sage grouse protection.

The property is owned 100% by VR, registered to the Company’s wholly-owned US subsidiary registered in Nevada. The general terms of a binding Acquisition Agreement dated June 22, 2020, are provided in a news release of the same date, with Closing announced on June 25, 2020.

Overall, the Company continues to synthesize and integrate regional and property-scale data for Reveille, in conjunction with an already established GIS workspace for the nearby Big Ten epithermal gold project hosted in the Big Ten Tertiary volcanic caldera of similar age to the Goblin Knobbs caldera at Reveille.

A comprehensive set of ground and airborne geophysical, geological and geochemical surveys were completed at Reveille during the summer field season of 2020, designed to cover the entire silver-copper mineral system at Reveille, and identify and prioritize targets for high grade silver mineralization. This will be the first modern and comprehensive exploration of the collective group of showings at Reveille in the context of current CRD mineral deposit models.

The bulleted list below illustrates the extent of exploration done and the depth of data acquired this summer from an array of surveys exploiting the most modern technologies available:

The detailed geological mapping completed by VR has determined the precise stratigraphic position of mineralization, and importantly the preferred structural controls to hydrothermal fluids not identified or described by previous workers in the district.

VR continues the process of integrating all data sets in order to evaluate each silver-copper showing on its own merit, but also to evaluate the potential for a large-scale, sub-surface intrusive root and driver to the CRD mineral system as a whole, something that has never been done before at Reveille.

Upon receiving, integrating and interpreting all of the data and reports from the work this summer, VR will consider a follow-up surface exploration program this fall. The goal will be to transition our exploration from property-scale to target scale, and we look forward to providing updates on this work later this year.

The Reveille property is located in the southern part of the Walker Lane mineral belt in Nevada, host to numerous Tertiary-aged epithermal gold and silver deposits with production spanning some 160 years, from the days of the Comstock lode at Virginia City in 1860 to the giant Round Mountain deposit and heap leach mine operation today.

Like Comstock, Round Mountain and many other precious metal deposits in the belt, Reveille is associated with Tertiary-aged, rhyolite volcanic centers. The property occurs in a setting of nested calderas; it is on the western margin of the Goblin Knobs Tertiary volcanic center where it is disrupted by the resurgent growth of the Kawich caldera to the southwest.

The Reveille mineral system is hosted within a sequence of generally west-dipping and locally folded Paleozoic stratigraphy in contact with the Goblin Knobs Tertiary volcanic rocks on the eastern side of the property. The stratigraphy spans Silurian Eureka Formation quartzite at the base, through the Ely Springs Formation of massive limestone interbedded with chert and mudstone, to the massive dolomite of the Nevada Formation that dominates the topography of the south Reveille range and the property. A veneer of dark, dense, organic-rich limestone interpreted as a tsunamite deposit related to the Alamo meteor impact overlies the limestone and dolomite package on the western side of the property.

Silver mineralization at Reveille occurs in vein stockworks, manto’s and breccia bodies within the Paleozoic carbonates, which occurs in the outer ring complex of the Goblin Knobs caldera, and is intimately associated with rhyolite dykes emanating from it. The carbonate units are completely altered to coarse crystalline dolomite throughout the entire property, whereas mineralization is focused along the intersections of bedding, fold axis and vertical fold limbs.

The CRD model unifies the numerous surface showings of high-grade silver in vein stockworks, manto replacement bodies and chimney-style breccia pipes. The model also underscores a new, large scale and high value target at Reveille, namely the root of the numerous vertical breccia pipes and vein stockworks recognized but virtually unexplored in the central part of the property. Evidence for a large-scale magmatic root and/or driver to the silver hydrothermal system at Reveille includes: 1. phyllic alteration mapped in rhyolite tuff both on the northern and eastern margins of the property, and; 2. intensely altered quartz-eye porphyry dykes pervaded by quartz veinlets and completely overprinted by sericite alteration at several showings.

Reveille has both scale and intensity:

A brief summary of new data highlighting the character and potential of the main showings themselves, and the overall silver-copper CRD mineral system at Reveille includes:

Silver Ace showing. Metre-scale breccia pipes with associated quartz vein stockworks occur within completely altered limestone at the Silver Ace and Saddle showings, where quartz veins observed at surface up to 2 m wide contain coarse-grained freibergite, with silver-bearing tetrahedrite also disseminated in altered limestone country rock. High grade silica replacement with 0.45% copper and 1,535 g/t silver in a fold hinge 100m above the Silver Ace showing and 400 m above the high-grade silver-copper replacement pods, feeder veins and and hydrothermal shatter breccia at the Lincoln Gulch showing in the valley below.

A sample of intensely altered quartz-eye porphyry containing 0.5 g/t silver, invaded by quartz veinlets and completely overprinted by sericite alteration is a rock type and alteration style that is a potential vector to the overall igneous driver and large-scale exploration target for the heart of the CRD hydrothermal silver-copper mineral system at Reveille.

Zebra – Combo showings. A breccia body at Pete has a continuous chip sample with 320 g/t Ag across 12 m. The fluid history at Zebra is dynamic: both the fragments and the matrix of the breccia are altered, and there are local mantos of massive, zebra-textured replacement and mineralization. Similar to the area of Lincoln – Lost City showings, grab samples of breccia or vein with red-brown silica cement have the highest concentrations of silver, which are up to 1,000 g/t Ag at Zebra. Overall, there is 1,500 m of lateral extent to the west-dipping, stratigraphically-controlled high grade silver mineralization between the Zebra and Spade zones. 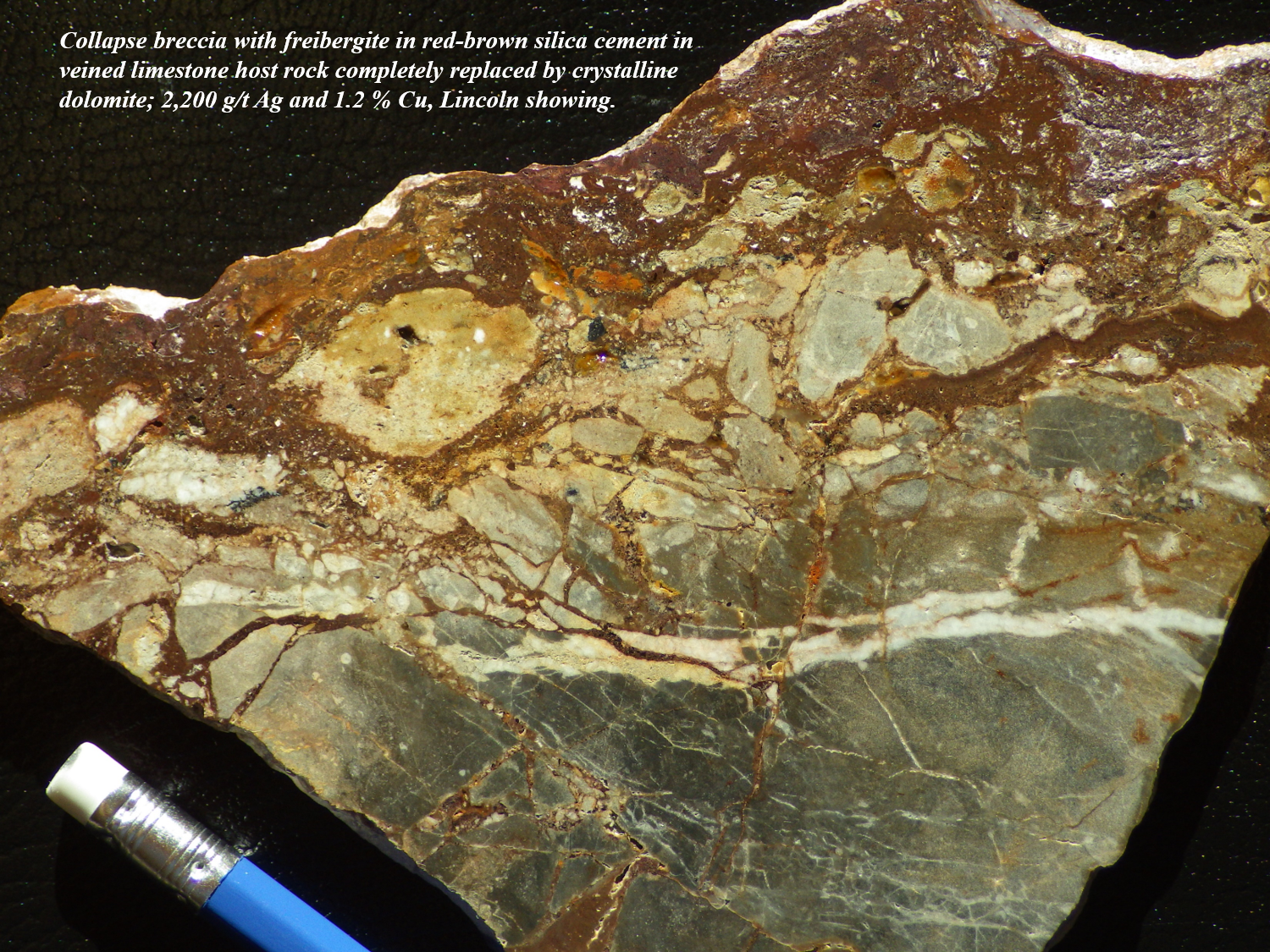 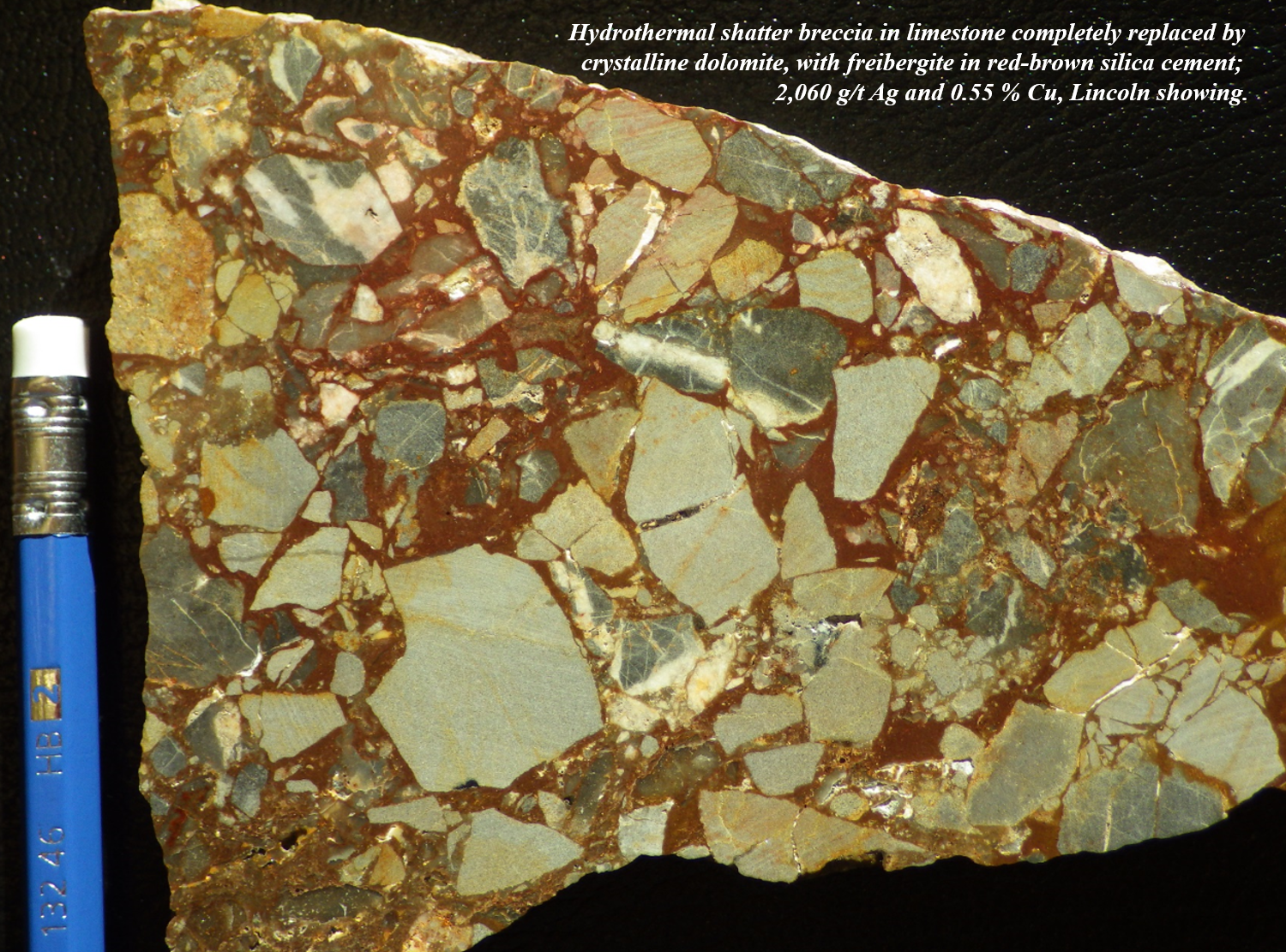 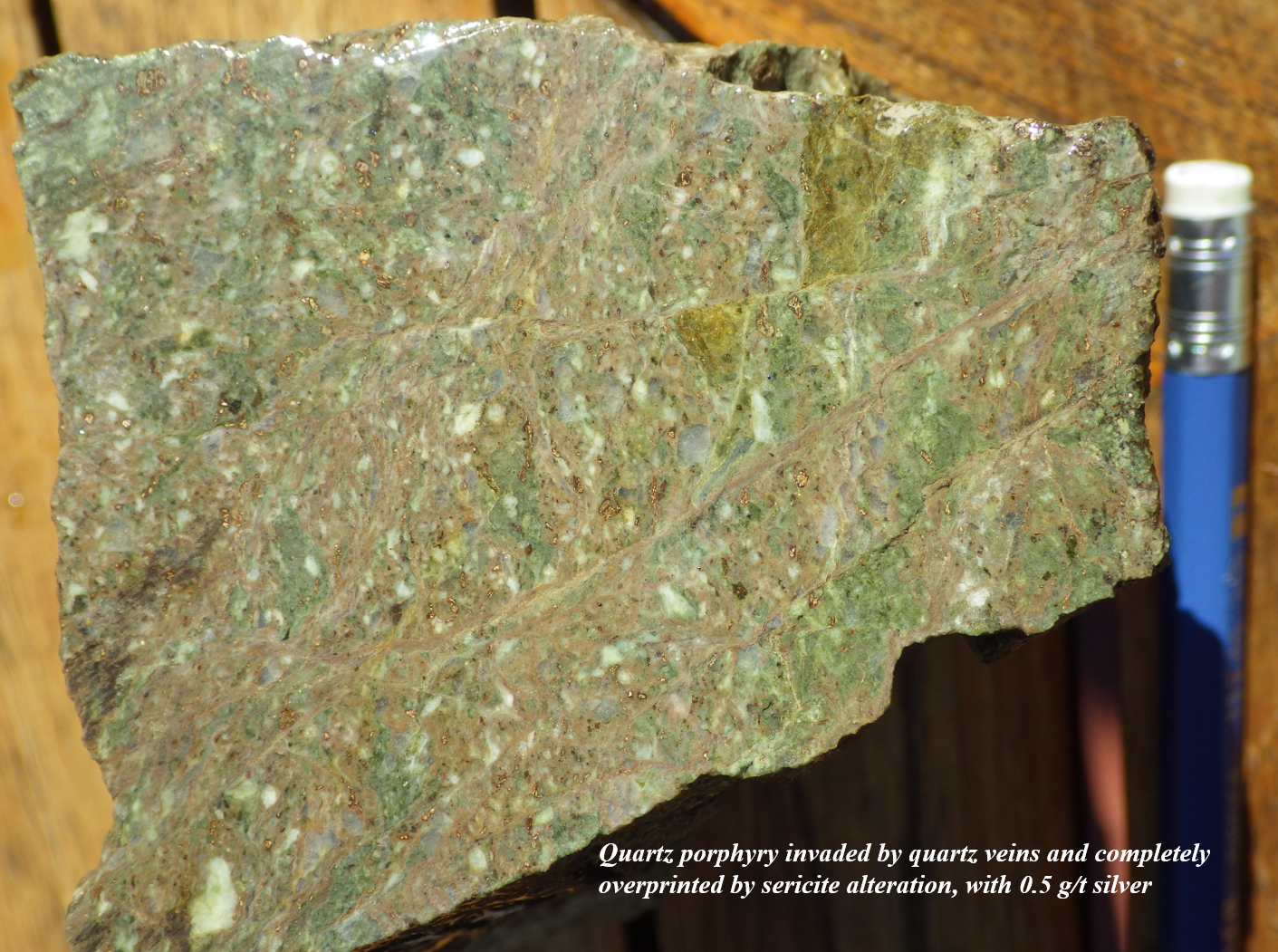 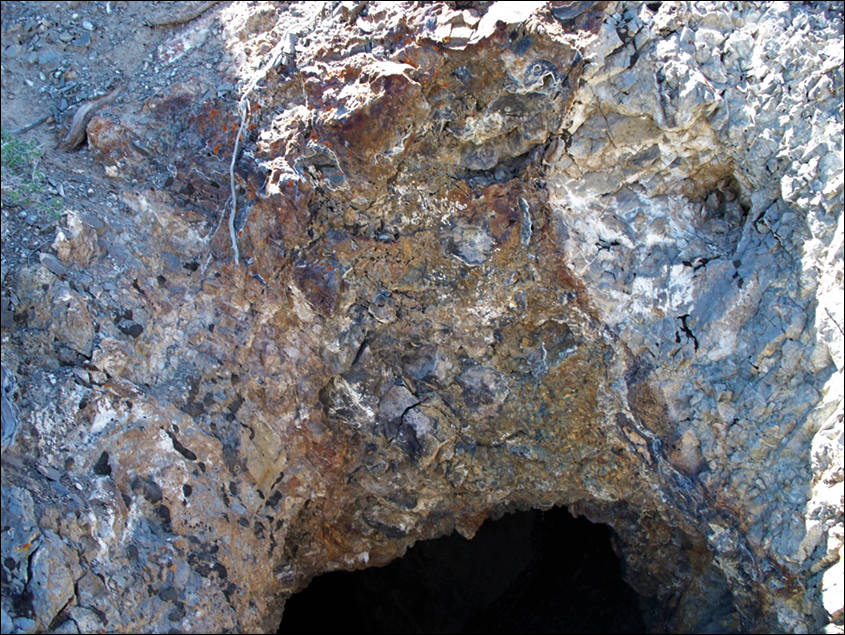 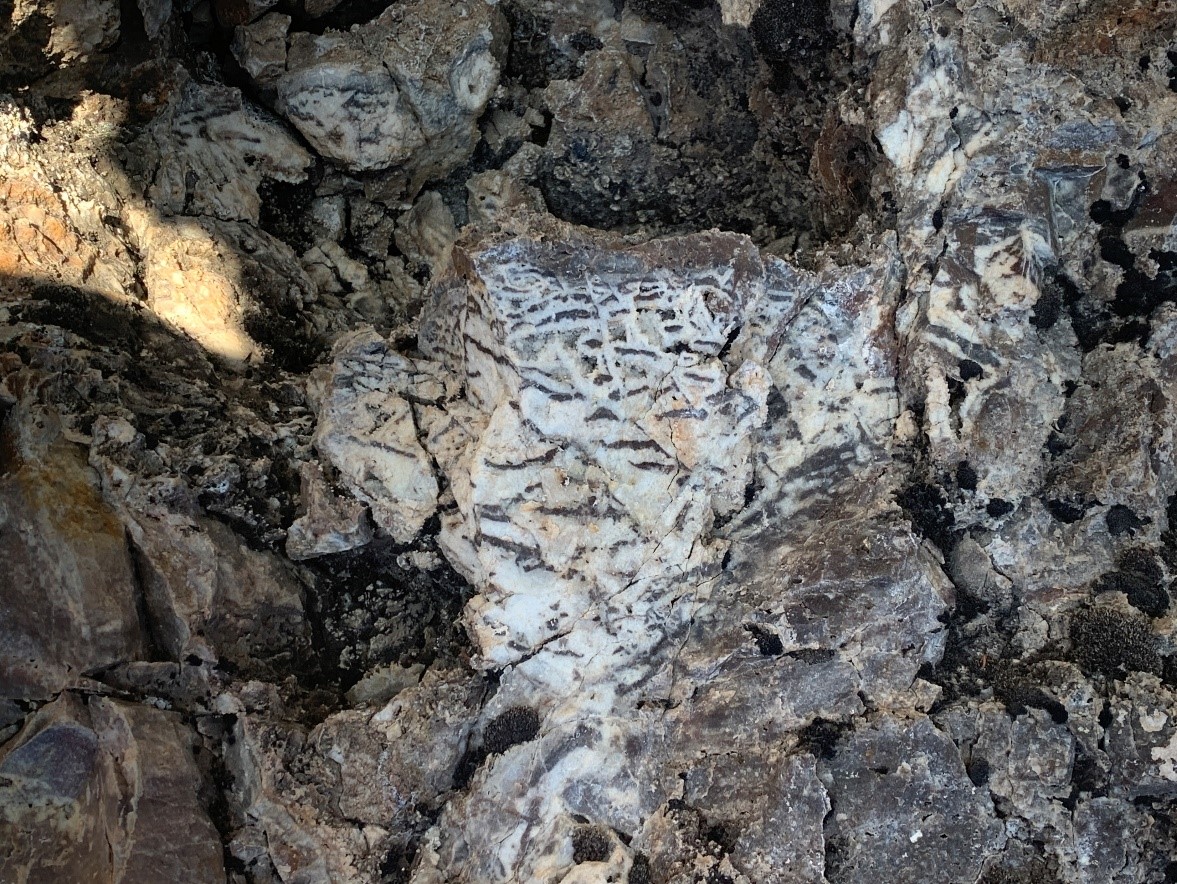